Nucleotides are biological molecules that are essential to almost all biological processes in the human body. Probably best known as the components that make up DNA and RNA they are also involved in many other cellular functions. With such essential roles, it is no surprise that our body is capable of producing these molecules itself, as well as salvaging and recycling used nucleotides in the body. There is an additional less well-known source as nucleotides are normal components of our diets and our bodies have ways of absorbing and making use of these. How much these three sources contribute to our nucleotide needs is unclear though regular healthy people seem to be capable of making and recycling enough to satisfy their regular needs. However, when the demand for nucleotides is increased, such as in the case of gut injury, rapid growth, decreased protein intakes, or when the immune system is activated, we may no longer be able to make quite enough . Under these conditions is has been proposed that dietary nucleotides may be termed conditionally essential and some extra in the diet may provide some benefits to systems like the gut and the immune system (Van Buren 1997).

Structural elements of common nucleic acid constituents. Because they contain at least one phosphate group, the compounds marked nucleoside monophosphate, nucleoside diphosphate and nucleoside triphosphate are all nucleotides (Wikipedia).

At their base nucleotides do in fact contain a base, small nitrogen containing compounds classified as either purines or pyrimidines, these nucleobases are adenine, guanine, cytosine, uracil, and thymine. When these bases have a pentose sugar attached, either ribose or deoxyribose, they become nucleosides and if this sugar has one to three phosphate groups attached they are collectively known as nucleotides.

Best known for being the building blocks of DNA and RNA, forming our genetic code, and carrying the messages that are translated into proteins these nucleotides are involved in many other processes. Nucleotides as adenosine triphosphates (ATP) transport the chemical energy for the physiological processes within our cells while others play an essential role in metabolism. Nucleotides also participate in cell signaling, as cGMP and cAMP, and form a part of vital cofactors of enzymatic reactions like coenzyme A, NAD, and NADP+).

When we eat food that contains nucleotides, as any unrefined food containing whole cells will contain a little of, our body has ways to digest and absorb them. Nucleotides are mostly eaten along with protein in the diet bound up in nucleoproteins. Digestion takes place in the small intestine as protease and nuclease enzymes break the nucleoproteins and then nucleotides down into smaller parts, most of them being absorbed into the cells of the gut as nucleosides with over 90% of them being absorbed (Hess 2012). 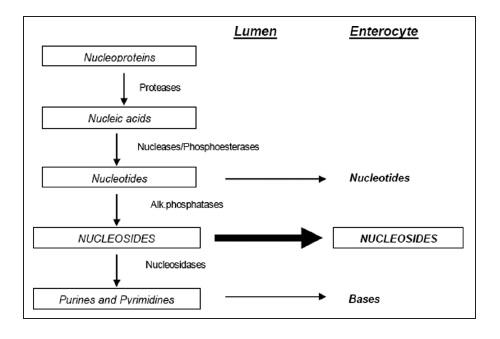 The digestions and absorption of dietary nucleotides (Hes 2012).

The first tissue to absorb dietary nucleotides and the first to make use of them is the gut. The cells of the gut are unusual in relying on a supply of nucleotides from the liver as generating these molecules from scratch is metabolically expensive and the rapidly dividing cells struggle to generate enough to fulfil their own needs (Grimble 1994). While only about 5% of the absorbed nucleotides are eventually retained for synthesis of DNA or RNA between 25-50% of those that are remain the gut cells (Hes 2012).

Compared to those on nucleotide free diets the intestines of weanling rats supplemented with nucleotides matured faster, had more mucosal protein, taller villi and more sugar digesting enzymes (Uauy 1990). Research on infant intestinal tissues suggests that adenosine monophosphate in particular plays a role in maintaining the balance of cell growth in the developing human intestine (Tanaka 1996). Another time when rapid cell growth occurs in the gut is during recovery from injury. In rats, the presence of nucleotides in their diet improved their recovery from intestinal surgery (Ogita 2002) and speeded up the recovery of the gut after five days of food deprivation in older rats (Ortega 1995). The presence of nucloetides in the diet also resulted in a faster recovery from diarrhea (Bueno 1994). After being absorbed in the gut the liver can also make use of dietary nucleotides with a range of effects on growth and repair (Carver 1994).

The cells of immune system can also struggle to fulfil their own nucleotide needs during periods rapid proliferation during immune responses and prefer to use salvage pathways and dietary sources (Gif 2002). Studies of the effects of nucleotides on human immunity have been limited to healthy individuals and the effects of exercise. High intensity and endurance exercise have been studied. In those receiving extra nucleotides, their level of salivary IgA was higher and their cortisol was lower than those taking the placebo (Mc Naughton 2006; Mc Naughton 2007). This suggests a long-term increased intake of nucleotides in the diet can enhance the immune response and blunt the hormones responses associated with the physiological stress of exercise.

Even if these nucleotides are not used and eventually excreted, they could have transient effects such as increasing blood circulation to the gut. Infants fed nucleotide-supplemented formula showed an increased blood flow to the small intestine after feeding compared to those without nucleotides (Carver 2004). This may be due to the adenosine as this triggers increased blood flow to the small intestine in dogs (Sawmiller 1992). Adenosine may have other anti-inflammatory roles as it is absorbed into the lining of the gut through interactions with the A2a receptor on T cells (Ye 2009).

No mention of health influences of food is complete now without mention of the gut microbiota and nucleotides are no exception. Infants fed formula with added nucleotides may have reduced cases of diarrhea (Yau 2003), possibly through enhancing the growth of Bifidobacterium, which is thought to help protect infants from gut infections. The addition of nucleotides has been shown to improve the composition of the microbiota of formula fed babies (Singhal 2008). What effect that dietary nucleotide might have on adult microbiota is currently unknown. It should come as no surprise that breast milk is a good source of nucleotides for the growing baby providing a number of beneficial effect on the health and development of the infant (Thorell 1996). As a curious aside the levels of different nucleotides in breast milk change during the day and night and may help babies get to sleep in the evening (Sánchez 2009). Many infant formulas now seem to have added nucleotides. 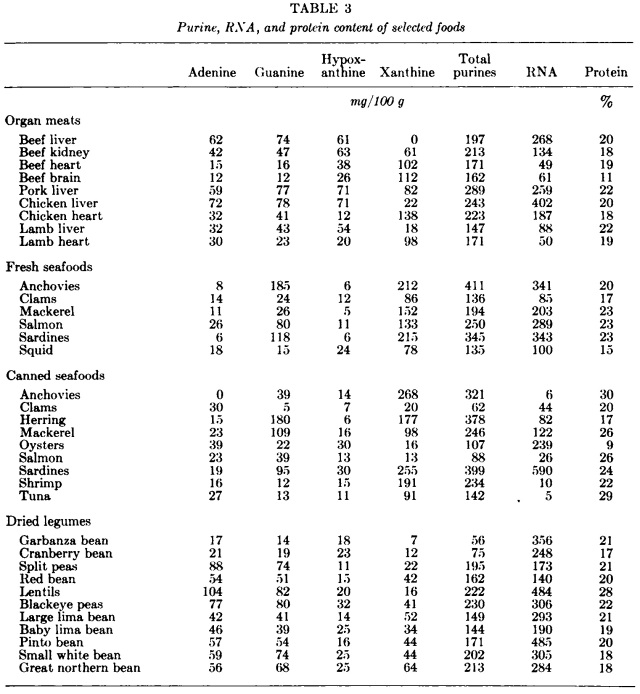 The purine content of selected foods from Clifford and Story (1979).

Given the wide range of potential effect of these molecules, it is worth a look at where you might find them in your food. Sadly, there is very little good published evidence for the nucleotide contents of different foods. What is known is that any food made up of living cells will contain them. However, the highest concentrations are in foods that have a high cell density and are from metabolically active tissues. This means that animal foods generally contain much more than plant foods, with the exception of beans and other legumes that have a relatively high amount in their seeds. Milk products may also contain significant amounts of nucleotides (Gil 1981). The table above published in 1978 shows the purine and RNA content of a few different foods, while not measured the pyrimidines tend to occur in roughly similar amounts to the purines. It is clear that offal like liver and heart, small fish, shell fish and beans are all good sources. All of these are measured as milligrams per 100 grams of food. 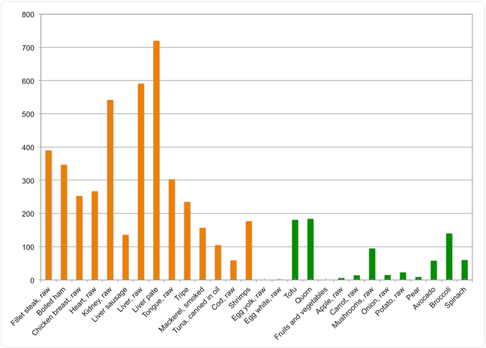 Another source is the graph above originating from a recently published article on nucleotides and health. This is the result of testing by a private company and shows the total nucleotide content in a typical portion size, unfortunately the details of what those portion sizes are is not provided. It is clear to see that offal and animal products are a rich source of these compounds with bean products, mushrooms and vegetables also contributing some. What it seems certain does not contain nucleotides is the refined food ingredients that are now commonly found in our diets such as, sugar, flour and vegetable oils. It happens to be the case that these ingredients are what is used to make nucleotide free diets for animal studies. Based on current evidence there can be no recommendation as to what quantity of nucleotides may be beneficial in our diet other than to suggest that some is better than none and perhaps more than most of us eat now.

The foods that are most abundant in nucleotides are now the ones that have become most scarce in our diets. The offal like liver, tripe and heart that were once popular are now largely avoided, while foods like beef are officially discouraged. This was likely to be even more true of our more distant hunting ancestors before the advent of farming who would have prized the parts of the animal we now squeamishly avoid. Even in more recent history those for whom animal products were out of reach often had diets relying on beans and other minimally processed plant foods or seafoods such as oysters.

It may be proposed that until recently a relatively higher intake of dietary nucleotides than now was a normal feature of human diets. While they may not be essential to survival, their absence does not result in any classic form of deficiency disease, it seems plausible to me that a regular intake may provide small but meaningful benefits to the health our gut and immune system and perhaps other systems of the body. While some may use this suggestion as a reason to promote nucleotides as yet another dietary supplement to sell to me it makes more sense to see this as yet another reason to include in our diets the nutritious foods our ancestors have always eaten.

Hess JR and Greenberg NA. (2012) The role of nucleotides in the immune and gastrointestinal systems: potential clinical applications. Nutrition in Clinical Practice. 27(2):281-94.

Sánchez-Pozo A and Gil A. (2002) Nucleotides as semiessential nutritional components. British Journal of Nutrition. 87 Suppl 1:S135-7.

Uauy R, Stringel G, Thomas R, Quan R .(1990 ) Effect of dietary nucleosides on growth and maturation of the developing gut in the rat. Journal of Pediatric Gastroenterology and Nutrition. 10(4):497-503.

This entry was posted in Articles, Nutrition, Uncategorized. Bookmark the permalink.