A bread too far: Food structure and insulin responses

“The nutrient and non-nutrient components of foods and their molecular relationships, i.e. chemical bonds, to each other.”

The complex structures within which nutrients exist inside foods can change the way our body responds to those foods. In two recent posts I looked at the how consuming the same amount of sugar either as fruit or juice can change blood sugar and insulin responses. After this I was reminded of another similar study from 2002 that tested breads and pasta and measured changes in some of the gut hormones that might be responsible for these effects.

First the study authors measured blood glucose levels after the meals. All three types of bread produced about the same peak in blood glucose while the pasta produced a lower peak. The glycemic index was not any different between the breads despite a big difference in the amount of fibre they contain. But while the peak in glucose was the same, 90 minutes after eating the white bread blood sugar fell to a lower level than after the other breads and stayed lower for a couple of hours. 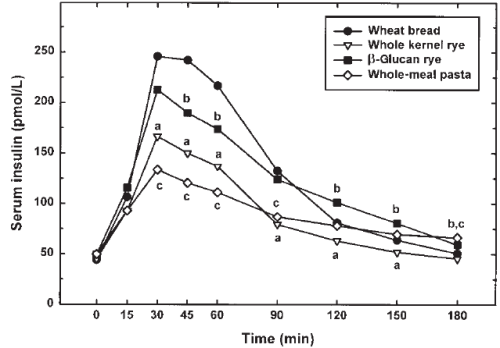 Now look at the insulin levels after eating the same meals. While pasta only produced a peak of insulin of 94 pmol/l above the fasting level, the whole kernel rye bread peaked at 135, the rye with added beta-glucan at 181, and the white flour wheat bread as high as 231.

The two rye breads are particularly interesting as rye bread with added beta-glucan fibre resulted in a higher insulin response than whole kernel rye, despite containing 17 grams of fibre compared to only 13 in the whole kernel rye. This suggests that adding purified fibre into a food does not reap all the benefits of having fibre intact within the food. White wheat bread produced the highest insulin, much higher than the wholemeal pasta, despite both being made from wheat. The Durum wheat from which pasta is made from is different to bread wheat and the resulting structure of the starch in pasta is likely to be quite different.

But how are these meals resulting in such large differences in insulin when they contain the same amount of carbohydrate? Firstly, the amount of insulin released by the pancreas is not determined solely by the level of glucose in the blood. Hormones called incretins released by the gut itself shape the insulin response of the pancreas. Two of the main incretin hormones are glucagon-like peptide-1 (GLP-1) and glucose-dependent insulinotropic polypeptide (GIP). Secondly, the amount of these gut hormones produced by the gut is influenced by the amount and type of food being digested.

To see if these incretin hormones could be playing a role they first measured GIP levels after the different meals. As you can see in the graph above white bread resulted in by far the highest GIP levels. Rye bread with added beta-glucan also resulted in higher GIP than whole kernel rye bread. As one of the main functions of GIP is to induce insulin secretion this probably explains some of the variation in insulin responses between meals.

Similarly, with GLP-1, levels were higher after white wheat bread and rye bread with added beta-glucan compared to whole kernel rye or pasta. As one of the functions of GLP-1 is to stimulate more insulin release this is also going to increase the insulin responses to the white bread.

Both gut hormones GIP and GLP-1 stimulate the secretion of insulin they have wider effects beyond just insulin release. Within the pancreas, they both promote an increase in insulin producing cells. While GIP enhances glucagon release, GLP‐1 suppresses it. In body fat, GIP enhances fat storage but GLP‐1 does not. These different effects suggest that the balance between these different hormones might be important. I shall discuss these more in another post.

While this study cannot tell us precisely why these different foods produced these different effects on these two gut hormones, it does suggest that the structure of the food seemed to play a key role. As the authors conclude;

“To conclude, we studied in detail the in vitro properties of starch from various sources; the effects of botanical structure, food form, and fiber content of these grain products on postprandial glucose, insulin, and incretin responses; and the rate of gastric emptying in response to the starches from different foods. The results indicate that the lower insulinemic response to the rye breads and pasta than to the wheat bread is not explained by the fiber content, type of cereal, or rate of gastric emptying, but by the structural properties of the food. These properties should be studied further to produce foods that could be useful in preventing the deterioration of glucose tolerance in Western persons.”

This study interests me so much because it shows how foods with similar ingredients and carbohydrate content, but with different structural properties, can cause such different responses in our bodies. It also means that the glycemic index is not a good guide for how different foods affect our hormonal responses to eating.

OBJECTIVE: We investigated what factors in grain products affect human glucose and insulin responses and elucidated the mediating mechanisms.

DESIGN: Ten men and 10 women [mean age: 28 +/- 1 y; mean body mass index (in kg/m(2)): 22.9 +/- 0.7] with normal glucose tolerance were recruited. The test products were whole-kernel rye bread, whole-meal rye bread containing oat beta-glucan concentrate, dark durum wheat pasta, and wheat bread made from white wheat flour. Paracetamol, a marker of the rate of gastric emptying, was added to the breads during baking. Each product provided 50 g available carbohydrate and was served in random order with breakfast (except for the beta-glucan rye bread, which was served at the last visit). Fasting and 8 postprandial blood samples were collected at intervals of 15-30 min for 3 h to determine plasma glucose, glucose-dependent insulinotropic polypeptide (GIP), glucagon-like peptide 1 (GLP-1), serum insulin, and paracetamol concentrations. The in vitro starch hydrolysis, the structural characteristics (by light microscopy), and the molecular weight of beta-glucan in the test products were analyzed.

CONCLUSIONS: Postprandial insulin responses to grain products are determined by the form of food and botanical structure rather than by the amount of fiber or the type of cereal in the food. These effects may be mediated through GIP and GLP-1.