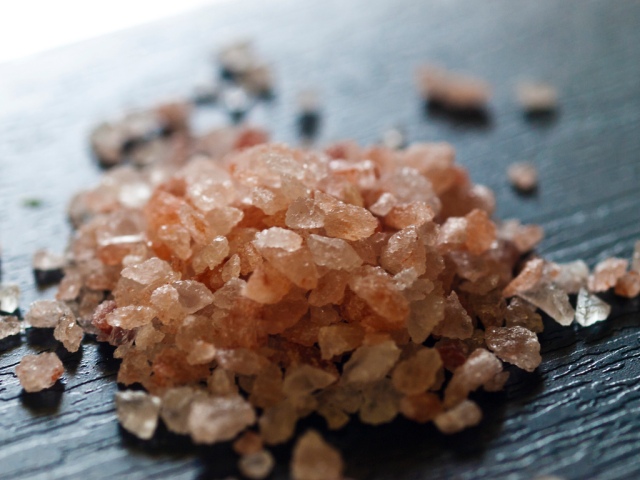 A relatively recent addition to our British shops, and once restricted to health food shops, it now seems that pink Himalayan salt can be found almost everywhere even appearing in major supermarkets. A quick browse of the topic of Himalayan salt online quickly reveals a plethora of wild health claims related to these rather attractive pink salt crystals. Curious as to where this product had so suddenly appeared from in recent years I started to look into the subject online but was dissatisfied to find the information available disappointingly repetitive without any reputable sources provided.

For a start this salt does not come from the Himalayas mountains but instead from a few hundred miles south in the mountains of Pakistan. While the Khewra salt mine from which the pink salt originates is an interesting subject in itself, the term Himalayan Salt was clearly a stroke of marketing genius.

The story of the appearance of Himalayan salt as a health food in Europe seems to have begun in Germany with a man name Peter Ferreira, whose real name seems to be Peter Druf according to this sceptic website and has it seems been called by some the “König der Scharlatane” or king of charlatans. Apparently still selling Himalayan salt, as his biography on this site suggests, he claims to be a Biophysicist although no proof of this is forthcoming. His rise to prominence began it seems in late 1990’s Germany with public lectures and tape recordings claiming this Himalayan salt to be a panacea for all ills. Although I cannot speak German, recordings of some of these have been posed on youtube including this audience exhausting five hour monologue. Further prominence in Europe was achieved with the release of the book Water and Salt: The Essence of Life – The Healing Power of Nature that details “the powerful healing qualities of Himalayan Crystal Salt” co-authored with a Dr Barbara Hendel who is apparently still working as some sort of holistic medicine doctor in Germany.

While there are plenty of rather wacky language used in relation to this salt many of the claims rest on its mineral content, as it is reputed to contain 84 minerals. The details of its mineral composition that are widely quoted are shown here, although the site itself is not making any wild claims, the table is reproduced from the Peter Ferreira’s book Water and Salt. Some investigation uncovered that the source of this detailed analysis is an Institute of Biophysical Research, Las Vegas USA, which it seems Peter Ferreira is the director of and appears to exist in name only. As Ferreira was also the owner of the main company selling this salt at the time it makes me wonder who carried out the analysis or whether is was just made up from Ferreira’s imagination. According to wikipedia a German TV show tested some Himalayan salt available for sale in that country and only found 10 minerals other than sodium chloride were detectable, although sadly this information does not seem to be available online anywhere.

Looking more closely at the reputed 84 minerals it is clear that the table is laid out in a way that can easily mislead the unwary, as it clearly has done. For example this site which states “The Easy Way To Sneak 84 Minerals Into Your Diet Daily“, with a copy of the pages from the book helpfully included at the bottom of the page. In fact when the table lists the salt as containing <0.001 ppm of boron this means that the test used could not detect any boron within the limits of the test. As scientific tests usually have a lower limit of detection when nothing is measured the results are presented as “less than” the detection limit, as such a test cannot prove that none is present. So 53 of the elements in the table were not detected in the salt. Many of those elements that were detected were present in such absolutely tiny amounts as could be found as contamination in almost anything you might test.

After searching for some independent testing I found a recent study published in the Journal of The Chemical Society of Pakistan that investigated the mineral and trace element content of a range of different coloured salt samples from the Khewra salt mine. The main constituents are shown in Table 1 below and this clearly shows that sodium and chloride were the main mineral in all the samples, whatever the colour, making up between 97.55% and 98.3% of the salt. Small amounts of calcium, magnesium, sulphate, and potassium were also detected although as these each formed less than 1% of the Khewra salt they are probably of no nutritional significance.

Reassuringly the levels of toxic metals like lead and cadmium were very low or undetectable. Iron was found which is to be expected as it is iron oxide that gives the salt its distinctive pink colour. However at less than 1 mg/kg of salt the quantities of iron in the salt are exceedingly small and of no relevance to our human health. To put it into perspective according to this study a 6 gram teaspoonful of this salt would contain at most 6 mcg or iron, compared to 150 mcg or iron is a small raw carrot.  The other trace elements measured were also found in extremely small amounts. These results would agree with the reported ten minerals that were detected in samples of salt tested in Germany. Another study I came across published in the Journal of Sensory Studies looked at many different salts from around the world also included Himalayan salt in their analysis. Their analysis of Himalayan salt found similar levels of calcium, potassium and sodium and slightly higher levels of zinc. This analysis found higher levels of iron in the salt, reported to be 39 mcg/g, which is a lot more than the previous study and so perhaps there is quite a lot of variety between different batches of salt. However, this would still only equate to  235 mcg in a teaspoon of salt.

In summary “Himalayan” rock salt contains mostly sodium chloride with a small amount of magnesium and calcium as found in most unrefined salt. Any other trace elements it contains are in really tiny amounts, which is a good thing as many of those like lead would not be desirable in any larger quantities. I don’t see anything wrong with using some of this salt as its colour is quite attractive though it may not really be worth the prices that are often charged for it. However, the origin of its rise to prominence in Europe is really rather dubious and any health claims surrounding it are deeply suspect. I think it unlikely to have any effect on my health beyond any other type of unrefined salt.

What interested me more after looking into the origin of this salt is the mines in Khewra salt mine from which it originates. Apparently in use for more than two thousand years the workers of the mine have used blocks of the many hued salt to construct beautiful underground constructions including the tiny mosque in the photo below.