Cullen skink is a traditional thick Scottish soup originating from the North East of Scotland that has remained popular to the present day. It can be found on the menus of local restaurants here in the North East and is often served as a starter in formal Scottish dinners. The name derives from the two separate sources. The ancient coastal town of Cullen lent its name to this dish and to quote Catherine Brown in A Year in a Scots Kitchen,

“Ever since this soup-stew first attracted the attention of food writer and folklorist, F M McNeill, which she describes in her book The Scots Kitchen (1929) as Cullen Skink, it has been known by that name though, of course, it was a universal habit throughout East-Coast fish-smoking communities who harvest their living from the sea.”

As for Skink, which may be an unfamiliar word now, in Scots it refers to the shin and is so used to describe the cut of beef from the shin of the animal, including the bone, which was a common base for soups and stews in Scotland. This has the same meaning as another old Scots word Hough, which still used for ham houghs better known elsewhere as hocks. Presumably the people in coastal communities such as Cullen were lacking in beef skink as a base for their soups and adapted to what was in plentiful supply, smoked haddock, and the name has long persisted. 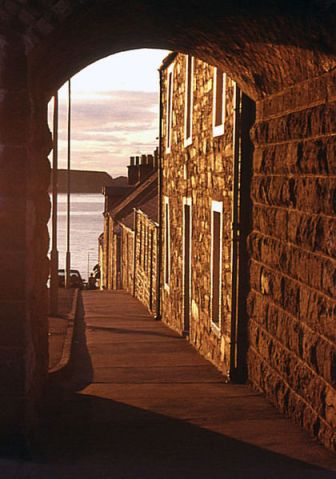 Cullen skink is traditionally made from Finnans, a type of cold smoked haddock originating from the North East of Scotland. These are prepared with a whole haddock, its head removed and slit open with the bones left in, which is brined and smoked to a pale straw color. Named after the tiny village of Finnan, just six miles south of Aberdeen, the inhabitants of which were famed for this particular method of smoking haddock. Traditionally prepared Finnan haddock is an uncommon sight here now and most smoked haddock is sold as fillets, sometimes known as an Aberdeen fillet, made as for a Finnan but without the bones. This is the type of fish I used in this recipe as it is readily available from my local fishmongers. This shouldn’t be confused with the more commonly available bright yellow smoked haddock fillets that are artificially dyed to imitate the color of the traditional long smoking. The vivid yellow color is not suited to using in a Cullen skink.

There are many variations in the making of Cullen skink. My recipe is a rather general one from reading a number of other recipes and I usually use all milk, rather than both milk and water as some recipes do, to make it somewhat richer and more filling. The inclusion of leek is not so common but I do like something green in my food and I find it adds some extra flavours together with the onion. I also add some dried dulse, an unconventional but otherwise traditional Scottish ingredient, that adds some extra flavours and nutrition to the resulting soup.

There can be few other meals as warming and satisfying on a cold autumn evening in North East Scotland than a piping hot bowl of Cullen skink.