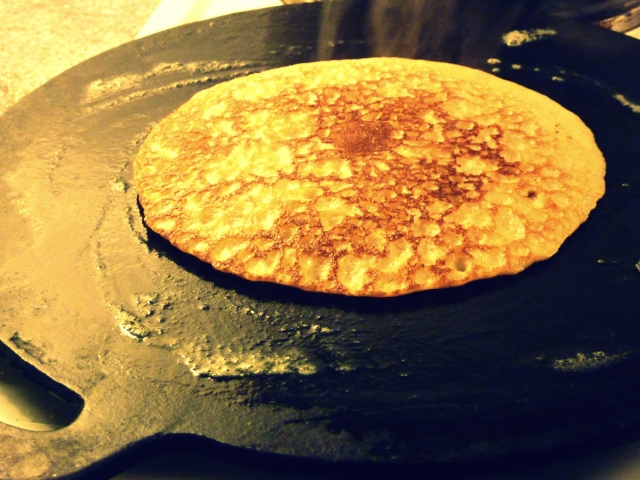 Oatmeal used to be such an intrinsic part of the traditional Scottish diet that it was utilised in many different ways that have now rather fallen out of fashion. Reading through my copy of A Scots Kitchen, in the chapter titled Bannock, Scones and Teabread, I found the following recipe for oatmeal pancakes recorded from a certain Mrs Cleland. Being an old recipe the directions are rather less detailed than you would find in many modern recipe books.

Boil a chopin (quart) of milk and blend it in a mutchkin (pint) of the flour of oatmeal thus: keep a  little of the milk and mix the meal by degrees in it, then stir in the boiling milk; when it is pretty thick put it to cool, then beat up six eggs with sugar, nutmeg, the grate of a lemon, and a little salt. Stir all together and fry them in butter, putting in a spoonful of the batter at a time. Serve them up hot, with beat butter, orange, and sugar.”

The recipe did not provide any suggested number of servings however a chopin of milk and a mutchkin of oatmeal seemed rather a lot for just myself and so I reduced the recipe by half. While oatmeal flour is not available, if it ever was, I made what seemed to me closest to flour by sieving fine oatmeal  from The Oatmeal of Alford through a sieve to remove the larger pieces of oat. The result certainly resembled flour and perhaps Mrs Cleland used the same method. The quantities of sugar, nutmeg and lemon zest were obviously a matter of personal taste and experience to the originator of the recipe so I was cautious in adding only a small amount of lemon zest and only 1 tablespoon or sugar as I do not have a particularly sweet tooth. It seems that a number of traditional Scottish recipes employ the use of flavourings like lemon and spices such as nutmeg, while these are not typical ones I would use in a pancake I thought I would stick to the recipe this first time.

To begin with I heated the milk in a saucepan bringing it almost to the boil. I then realised I had neglected to retain any milk to mix the oatmeal into first. Mixing the oatmeal into the hot milk caused it to clump together however this was reminded with the use of my little immersion blender. While this cooled I beat the eggs, sugar, nutmeg, lemon zest and salt together and then mixed this into the oatmeal batter.

I used my iron griddle greased with butter for cooking the pancakes heating it up to a medium heat so that the batter just started to sizzle when placed on it. The recipe calls for an undefined spoonful of batter to be used when making the pancakes but I soon realised that using any small spoon would result in very many small pancakes. Perhaps in this case ‘spoon’ refers to a larger serving spoon. I decided to pour on the batter to make pancakes about 4 or 5 inches across. As the oatmeal does not hold together as well as wheat flour I cooked these for 2 or 3 minutes on either side until nicely browned and turning them over carefully.

I was surprised at how well these pancakes held together and the oatmeal flour produced a rather delicate light texture that I would not have expected from oatmeal.

As there was only me to eat them this recipe made rather more pancakes than I could consume in one evening and I lost count somewhere during the making and eating. However, this did leave some extra pancakes to take for lunch the next day.