I have a personal interest in the eating of honey and the diets of our ancient ancestors. Therefore, I was particularly interested to read a recent paper in the journal Food and Foodways. Here Alyssa Crittenden, a behavioural ecologist and nutritional anthropologist at the University of Nevada, Las Vegas puts forward the argument for honey having a much more important role in the diets of our early human ancestors than has been previously thought.

What our ancient ancestors were eating has attracted rather a lot of interest in recent years, particularly in how changes in diet may have influenced the evolution of the ancient hominin species that eventually became us. Hominins include all our ancestors and their relations since our split with our nearest living relations the chimpanzees. The gradual increase in the size of our distant ancestors’ brains, beginning around 2 million years ago, coincided not only with the development of Oldowan stone tools but also with a reduction in the robustness of their teeth and a decrease in the size of gut. This suggests an increase in the consumption of more energy dense and easier to digest foods were feeding an increasingly energy hungry brain. Reconstructions of these Paleolithic diets have tended to focus on the role of hunting or scavenging of meat, or more recently the digging up of underground tubers, in these changes to the diets of our early ancestors but honey as a potential food has been largely overlooked..

Honey has several qualities that make it a highly nutritious food, as Crittenden points out. It is energy dense, and very tasty, being 80-95% sugar in the form of glucose and fructose. Combined with bee larvae, which add some protein, fat and vitamins in the form of wild honeycomb makes honey an attractive source of food for any hungry forager. The nutritional benefits to eating honey for anyone living from what they can hunt and gather in the wild may be obvious but direct evidence for its exploitation in the past is less forthcoming as honey leaves no trace in the fossil record. Instead, Crittenden turns to indirect strands of evidence to make her case for its importance in the past.

Modern hunter-gatherer peoples around the world provide the first of these, as honey and bee larvae form important foods for many populations of hunters and gatherers around the world. In Paraguay, the Ache tribe, who consider honey and bee larvae to be the second most important food in their diet after large game meat, can at times consume 1,100 calories of honey a day. Honey foragers in Nepal use bamboo ladders to climb within reach of the cliff face hives of large stinging honeybees. In the Indian Ocean the Onge of the Andaman Islands are also reported to collect and consume large quantities of honey and bee larvae and many  Aboriginal peoples of Australia used digging sticks, hammer stones, and stone hatchets to break into beehives.

However, the amounts collected and eaten remain largely anecdotal and so it is to African foragers we must turn to find the most detailed recorded accounts of honey collection and consumption. Among the Hadza hunter-gatherers of Tanzania, studied personally by Crittenden, honey is rated as the most highly prized food, even higher than meat in the diet. Honey makes up a sizable 15% portion of the Hadza diet including both honey and larvae. Liquid honey is even used as a primary weaning food for Hadza children and older children often go hunting for hives themselves to bring honey back to share at the camp. The Hadza also enlist the help of the honeyguide bird to guide them to wild hives in return for some honeycomb for the bird. This close mutually beneficial relationship also hints at very ancient origins that must have developed through interactions with our honey hunting ancestors over countless millennia.

However, the Hadza honey consumption pales in comparison to that of the Efe foragers of the Ituri Forest in the Democratic Republic of the Congo who, during their “honey season” lasting from July to August, move deep into the forest in search of honey and larvae. During this time, they rely almost entirely on honey, brood, and pollen with families collecting together and the resulting honey making up roughly 80% of their calories at this time, with honey forming the largest component of their diet during the wet season. 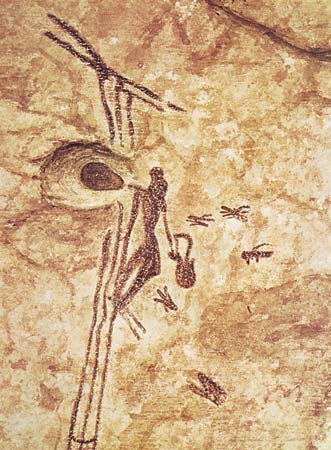 Looking further back many prehistoric carvings on rock depict our ancestors in the act of honey gathering. Examples of such rock art can be found in many parts of the world ranging from figures smoking out hives filled with honeycomb to others climbing ladders to reach hives high in trees. While these works of art suggest honey was an important part of daily life in the Paleolithic we might expect that early hominins were raiding hives long before anyone thought to record their exploits.

It also seems that our primate relatives also enjoy their share of the wild bees’ efforts. A variety of monkeys and ape are honey collectors when they have the opportunity. This includes Baboons and macaques gathering honey from stingless bees and orangutans using probes of vegetation to retrieve honey or smashing the hive open. Our closest relative the chimpanzee is known to collect honey with the aid of tools made from sticks at many different locations. If our primate cousins now are able to exploit honey as a food source, it seems unlikely that our early hominin ancestors would have been at least as capable.

The developments in stone tools 2.5 million years ago and later the use of fire may have given early hominins easier access to hives and increasing the amount of honey in their diets and providing an edge in survival and a crucial extra energy source for their enlarging brains. While no one would deny that meat and other foods were very important it seems that honey deserves at least more attention than it currently receives when considering the diets of our distant ancestors.

This entry was posted in Articles. Bookmark the permalink.